Logo History of the AAC 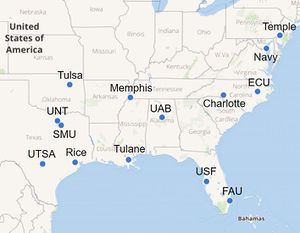 The American Athletic Conference has been a part of the NFCAA since the inception of the Football Bowl Subdivision (FBS). Prior to FBS Season VII, it consisted of twelve teams, split into two geographic divisions. However, due to real-life realignment that was implemented after FBS Season VI, the makeup of the AAC changed completely. UCF, Houston, and Memphis left for the Big 12 Conference, while UConn left the conference to become an Independent. Replacing these schools were Charlotte, FAU, North Texas, Rice, UAB, and UTSA, all of whom departed from Conference USA. 2 new divisions of 7 teams named "Freedom" and "Independence" were created prior to FBS Season VII, and are currently in use today.