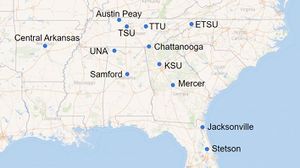 The Atlantic Sun Conference has been a part of the NFCAA since the inception of the Football Championship Subdivision (FCS). The conference remained unchanged for the first two seasons. Before FCS Season IV, North Alabama replaced Savannah State, as the latter was moving back down to Division II. The divisions were also redrawn, and given new names: Dawn and Dusk. This format would remain until FCS Season VII, when large-scale realignment saw the conference landscape change drastically. Alabama A&M, Alabama State, Bethune-Cookman, and Florida A&M departed for the newly-formed SWAC; Campbell found their way to the CFC; and Jacksonville State made the jump to the FBS' Conference USA. New teams to the ASUN included Austin Peay, Central Arkansas, Tennessee State, and Tennessee Tech, all of whom were members of the recently-dissolved DIC. Geographic divisions were also reinstated.