Logo History of the Big Sky 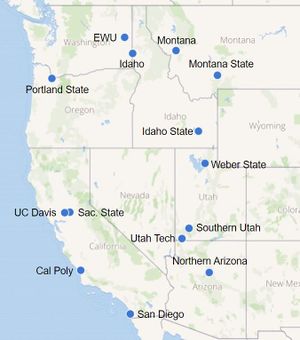 The Big Sky Conference has been a part of the NFCAA since the inception of the Football Championship Subdivision (FCS). After FCS Season II, Northern Colorado moved to the MVC, and Dixie State (later named Utah Tech) was brought into the conference. They took a spot in the South Division, while Weber State moved into the North Division. These divisions would remain until FCS Season IV, when they switched to an East/West geographical split. After only a season of that, the divisions were redrawn randomly, to create the Stars and Clouds Divisions. Seeking to leave his mark on the conference, the new commissioner promptly changed the divisions back to the East/West split, where they remain today.