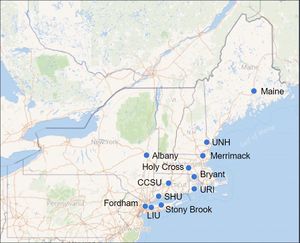 The Delta Intercollegiate Conference was a part of the NFCAA since the inception of the Football Championship Subdivision (FCS), but it was disbanded as a result of realignment before [[FCS Season VII]. The conference began with 14 teams in FCS Season II, but expanded before [[FCS Season III], as Southern Illinois and North Alabama gained their memberships. A small change occurred before FCS Season IV, as North Alabama moved to the ASUN, and Southeastern Louisiana took their place in the Tennessee Valley Division. More realignment was instituted before FCS Season VI, which saw Southeastern Louisiana return to the Southland, and Missouri State leave for the MVC. Large-scale realignment pre-FCS Season VII spelled the end of the DIC, and its members found places in the OVC, SWAC, and ASUN.