Logo History of the Southland 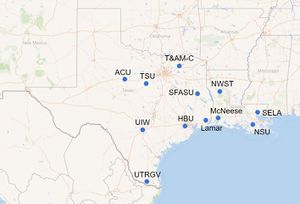 The Southland Athletic Conference has been a part of the NFCAA since the inception of the Football Championship Subdivision (FCS). For its first 2 seasons, the Southland was split into the Texas and Louisiana Divisions. Before FCS Season IV, it switched to a divisionless format, which was in place until FCS Season VI. A small realignment occurred, with UTRGV and Southeastern Louisiana joining the conference. The current commissioner decided that was the perfect time to change things up by randomizing the divisions, whilst also naming them after himself. Before FCS Season VII, another realignment saw Grambling State, Prairie View A&M, Southern, and Texas Southern depart for the newly-formed SWAC, and Sam Houston State leave for the FBS' Conference USA. Texas A&M-Commerce was added for a total of 12 teams in the conference. The eponymous divisions are still in use today.